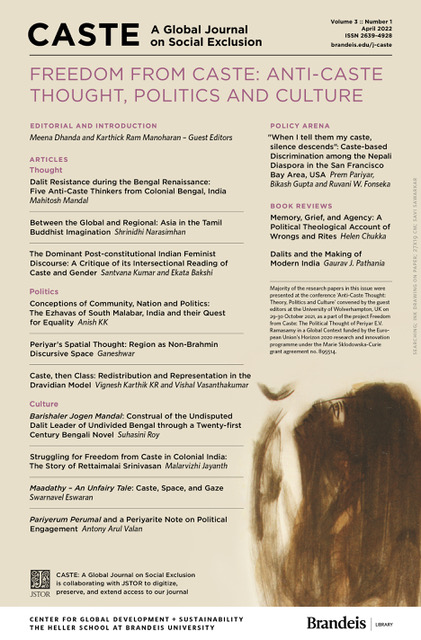 This article debunks the myth that Bengal is a casteless land or that Bengalis have no understanding of caste, by excavating, from within a Dalit historiographical framework, the rich and heterogeneous anti-caste politico-intellectual tradition launched and carried forward by the Dalits in colonial Bengal. Due to the paucity of space, it focuses only on three among sixty Dalit communities residing in Bengal and demonstrates the radical edge of five diverse anti-caste thinkers, namely, Harichand Thakur, Guruchand Thakur, Mahendranath Karan, Rajendranath Sarkar, and Mahendranath Mallabarman. Through a critical rejection of nationalist, Marxist and subaltern historiographies and interrogation of the Brahmanical appropriation of Bengal’s anti-caste tradition, it foregrounds the independent and self-critical intellectual history of the Dalits of colonial Bengal. It exposes the epistemic violence suffered by Dalit thinkers and reformers in the textbook historical narratives that glorify a Brahmanical Bengal Renaissance and highlights the neglected discourse of Dalit resistance and renaissance that had taken place at the same time in the same province. It shows how these anti-caste organic intellectuals fought the Brahmanical supremacists during the anti-British movement led by the Brahmins and upper castes, and how their agendas of self-respect and redistribution of wealth conflicted with the Swadeshi movement. Finally, the article demonstrates that while in the history of the anti-caste movement, Phule, Ambedkar, and Periyar justifiably occupy much of the discursive space, a significant and unacknowledged intellectual and political contribution was also made by their contemporary Bengali counterparts.